Why Are My Tropical Fish Suddenly Acting Strange?

What Tropical Fish Behavior is OK, and What’s Not?

Strange behaviors from your tropical fish can prompt confusion and concern.

Picture this: One day you walk over to your aquarium and find one of your tropical fish floating belly-up at the top of the water. Upset, you open up the lid to retrieve your seemingly dead friend. But just as you do, the fish suddenly springs to life and darts away.

What does this behavior mean?

To fully understand, care for, and enjoy your aquarium, you must learn about the behaviors of your tropical fish. Here’s a primer on the basics of fish behaviors and what they might mean. Some mating behaviors that fish exhibit might strike you as odd the first time you see them.

Indeed, many fish species have unique and unusual mating rituals. Among tropical fish, bonefish have been recently discovered to swirl like a tornado in their mating ceremonies.

On the other hand, African electric fish play “duets” by exchanging bursts of electric signals.

Among freshwater fish, the male drummer fish produces grunting and rumbling that sounds like drumming to entice the female, and betta fish perform an intricate dance just before mating.

Whatever species you have, they too may show seemingly odd behaviors that can be explained by courtship rituals.

But not all of them are so bizarre. Often, males build and defend nests as they enter mating seasons, even when chemically castrated. Pheromones released by females can excite them as well.

Even when no females are around, male fish are still driven to reproduce. These instinctive drives can result in more aggressive behavior than you you’re used to seeing.

If you are breeding your tropical fish, you should learn about what their pre-spawning, spawning, and post-spawning behavior patterns. That way, you’ll know what to expect.

For example, does your species maintain pairing after spawning while waiting for eggs to hatch? Or do the temporary pairs immediately split up? Knowing these things can quell any worries you might have. It also makes monitoring progress significantly easier. Some fish species "play dead" to fool other fish.

Why Would a Fish Play Dead?

Other fish behaviors can catch you off guard. Some are harmless, while others require you to step up your maintenance to prevent illness.

Let’s revisit the example of the fish playing dead. Some species play dead to fool other fish, often targeting scavengers as a food source. The Central American cichlid is a perfect example.

In other species, though, this behavior might hint at a health issue. For example, goldfish floating to the top of the water upside down could be a sign of either a digestive issue or a case of dropsy. Fish swallowing too much air when swimming to the top for their food is a more common cause.

Luckily, there’s an easy remedy. Thaw some frozen peas, skin them, mash the insides into manageable bites, and feed the peas to the fish. This should clear up the digestive issue. You can then feed your tropical fish from the bottom or a few inches below the surface to manage the problem.

If none of this helps, you may want to treat your tropical fish for dropsy.

Is Water Quality or Disease the Culprit?

Many fish naturally swim erratically during play or exercise. But this could also be the result of bad water quality. So, run some tests to see if that’s the case.

Poor water quality can also cause lethargic, listless behavior. The symptoms are usually due to improper temperatures or overfeeding, however.

Gasping for air at the top of the tank can point to poor water quality. Test your water in this case and consider an aerator for your aquarium.

Sitting at the bottom of the tank for a long time is normal for many species. Some spend all their time eating, sleeping, and swimming near the bottom. Others seem inactive during the daytime because they are nocturnal.

If odd behavior starts suddenly, however, it may be the result of a disease such as a swim bladder infection. Water quality or diet issues usually cause infection.

Sometimes, you might notice fish showing more aggression. In this case, make sure your tank is large enough for the number of fish and has enough hiding space. These are other steps you can take:

Fish also may take on protective behaviors when they are adjusting to changes in the environment. For example, fish may hide when you first introduce a new fish to the aquarium.

They may have the same reaction if you change the tank’s layout or conditions. This is normal, and most fish become less shy as they grow comfortable. 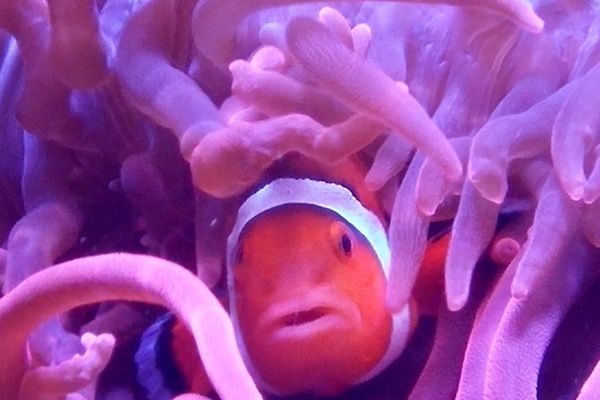 How Can I Troubleshoot Problems?

There are all sorts of other behaviors that your livestock might adopt, and numerous reasons for those behaviors. Tropical fish, for example, might start standing strangely if the salinity of the water is off.

Unfortunately, unlike other pets, you probably can’t bring your fish to a vet. You’re largely on your own when it comes to health issues.

You can research the species, read about diseases and other potential causes, and consult community forums online, but the information is somewhat scattered.

When you’re stumped about tropical fish behaviors, it’s good to have an expert you can trust. Living Art Aquatics in Crystal Lake, IL, has the expertise you need. We’ve been the premier provider for professional aquarium design and exotic fish care in the region for 20 years. We’re always available for questions at (847) 737-5151.

Editor’s note: This blog was originally published in September 2016 and was updated on July 18, 2019.